A Conversation with Bruce Duffie 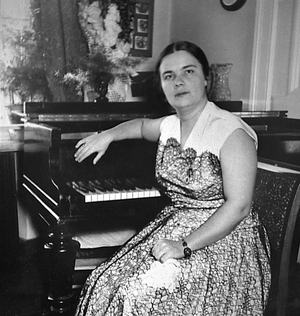 It is always a privilege for me to speak with musicians who travel the world and impact our lives.  To say that one or another is special in no way reduces any others who have come before or will come after.  The only implication is being a rare opportunity, and that is what was afforded me in October of 1992.  That was when the Russian pianist Tatiana Nikolayeva came to Chicago for a recital at Orchestra Hall.

During the era of the Soviet Union, we in the West knew of a few top musicians.  There were rumblings and rumors about others, but only with perestroika and glasnost did the floodgates open.   We then heard from quite a number of fine performers who, until that time were confined to the Eastern Bloc countries.  One of the most noted was Nikolayeva, and for a very few years we were able to enjoy not only her recordings but also her live artistry.

Our time together that afternoon was brief, and we spoke of only a few topics.  Needless to say, however, I came away with a newfound appreciation for this extraordinary person.

Bruce Duffie:    Thank you very much for coming to .  I understand that one of your recordings has won an award from Gramophone Magazine?

Tatiana Nikolayeva:    That was in November, 1991.  I was very happy about that.  The award was given to me at the Dorchester Hotel on November 18.

BD:    Do you play the same for a recording as you do in a live concert? 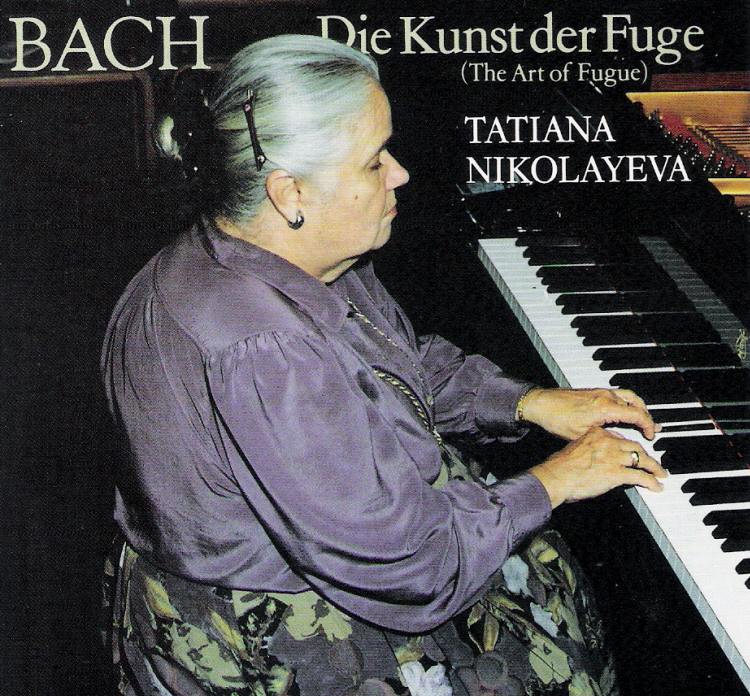 TN:    It is very different.  The presence of the audience plays a very, very important role.  At the recording sessions, which usually take place in a studio or in a church, I try to inspire myself by imagining an audience in my head.  I much prefer live performances.  Even if some little technical flaws happen, it doesn’t matter because the most important thing is the contact with the public.  That is very important for an artist, but you must accept that it is also important to make recordings.  I have made two sets of recordings of the 24 Preludes and Fugues by Shostakovich.  The first was done in in 1961 – about thirty years ago – with a very good recording engineer; his name is Valentin Skoblo and he now lives in .  I made it in the concert hall of the Gnessin Institute.  It was very memorable because I was expecting my son at the time.  Shostakovich was still alive; he listened to the recording and was very pleased.  He actually thanked me.  But that recording was not perfect in the technical sense.  Today we have the compact disc which is better.

BD:    So the newer recording has improved sound, but is the interpretation also better?

TN:    I would say that my later recording is different.  My friendship with Shostakovich lasted twenty-five years and was very intimate.  I absorbed his music and knew very well how to play it.  From 1950 until he died in 1975, I was present at all of his premieres.  I even attended many of the rehearsals.  Each new piece was a very big event in the concert life in .  His Fifth String Quartet was created at the same time as 24 Preludes and Fugues, as was the Tenth Symphony.  The Preludes and Fugues was something very special: I was watching and listening to them being born.  When he wrote the piano pieces, he would call me almost every day.  I’d come and he’d play excerpts to me.  I then started playing them myself and played them to him.  Even now I have these memories and understand his spiritual world.  I consider him a true genius, of course.  I am very grateful, and thank God that I didn’t lose the freshness of that early experience.  I have some freedom of interpretation, but fundamentally I play them the way Shostakovich wanted them to be played.

BD:    So it was a collaborative effort between the composer and the performer?

TN:    Well, to some extent.  He was a man of very few words.  He didn’t talk much.  He was very laconic, even, for example, when Mravinsky conducted his symphonies.  But I knew him for 25 years, so I knew his musical and creative personality.  I knew what he wanted.

BD:    Having worked so closely with Shostakovich, does this help you in the presentation of other composers?

TN:    Unquestionably.  He influenced me a great deal.  When I was young, he came to some of my concerts – even if I didn’t play his works.  It was very inspiring and he always gave me advice.  This was very important inspiration.  I just want to add that for a while I was very satisfied playing just the Preludes and Fugues; I thought that they are so great that it would be enough for me.  But things changed, and I started playing his Trio and his Quintet and the two Piano Concertos.  I recorded his Second Piano Sonata, 24 Preludes Op. 34 (not the Preludes and Fugues Op. 87), and Three Fantastic Dances, Op. 1.  Now I play virtually all of his piano compositions, including a few that I have learned recently.  Many pieces I play are by Shostakovich but not only by him.

BD:    Beyond Shostakovich, how do you decide which works you will learn from this huge repertoire for the piano?

TN:   Considering the wealth of music I play, sometimes I feel myself a millionaire.  I have a very big repertoire.  Sometimes I think I know practically everything that has been written for the piano!  [Laughs]  All 32 Beethoven sonatas, and so much else…  But I am never satisfied.  I am always happy to add something new.

BD:    You have a wealth of music in your fingers! 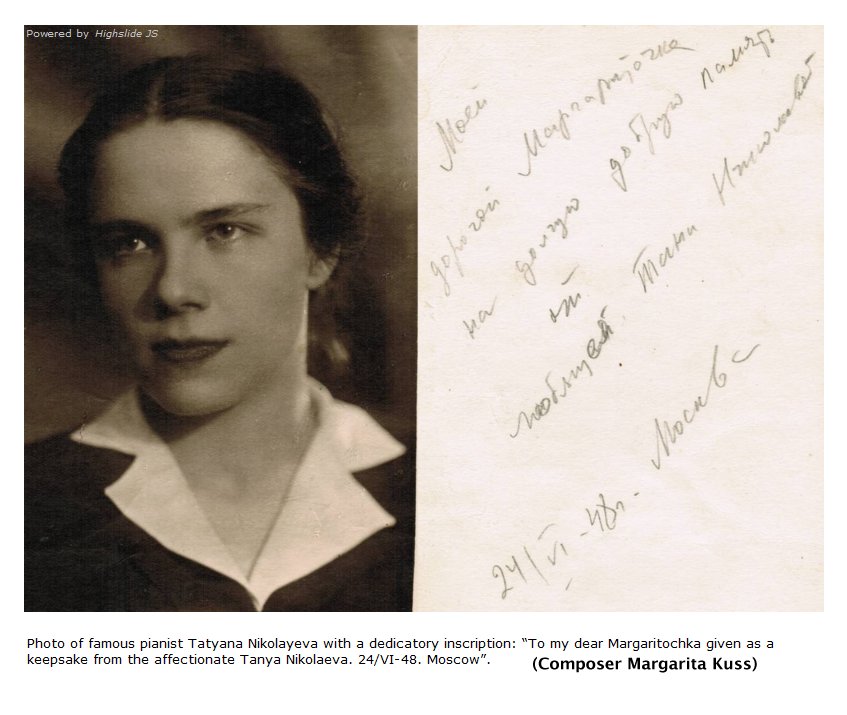 BD:    Do you have any advice for someone who wants to compose music for the piano?

BD:    Since you do some teaching, what general advice do you have for young pianists?

TN:    It’s not easy to combine my work as a pedagogue with my performing career which takes me all over the world.  I also compose, and of course I have a private life with my family, so it’s difficult; but I love very much the young generation, and to be surrounded by the young.  When I teach, I also learn from them and it’s very inspiring.  They make me feel younger and I am rejuvenated!  I believe I know what they try to reach, what interests them.  I try to help them in their future artistic life onstage.  I play many concerts myself, at least 100 a year, so I think I know how to help them.  The traditions of the Moscow Conservatory are very rich and all of us who teach are trying to preserve them.  We try to help the youngsters find the spirit of these works, to be profound and not superficial.  The technical mastery is very important, but what’s even more important is to discover the content of a composition and to relate it to the public.  The modern piano allows so many possibilities.  Its tone palette is so rich.  It can sound like a full orchestra, and the artistic level must come up to the technical level to give the composers what they wanted.

TN:    [Smiles]  Mmmmmm.  The basic purpose of music is to help people in their life.  The art of music, unlike any other form of art, can help human beings to cope with the tragic losses in life, and bring happiness into their life.  This way, I think, music is unlike any other art.  For example, I attended the concerts of the Chicago Symphony when they came to on a tour, and I saw how happy the audience was.  It makes the life a bit easier, even though we have to deal with the present situation in .  It was heartwarming to see how happy they were to listen to the great music being played, and it was great to see how music affected the people who were there.  And I believe it will be like this forever, that this special language of music will continue helping people in their lives.

BD:    Thank you for bringing your music to so many people for so many years. 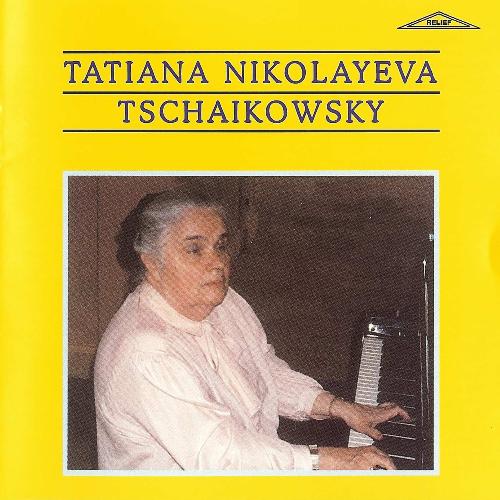 
This interview was recorded in the the office suite at Orchestra Hall in Chicago on October 16, 1992.  Translation at that time was graciously provided by Ella Braker, a violinist with the Chicago Symphony.  In preparing this transcription for website presentation, the translation was edited by Sergey Zaks.  Portions (along with recordings) were used on WNIB the following day, and again in 1994 and 1999.  It was also used on WNUR in 2006, and on Contemporary Classical Internet Radio in 2006, 2010 and 2011.  It was transcribed and posted on this website in 2012.

Award - winning broadcaster Bruce Duffie was with WNIB, Classical 97 in Chicago from 1975 until its final moment as a classical station in February of 2001.  His interviews have also appeared in various magazines and journals since 1980, and he now continues his broadcast series on WNUR-FM.