During the stress-filled and turbulent period of the 1960s, when the Chicago Public School System was often in an uproar, the evening program and the summer schedule were always well run and educationally stimulating, thanks in large part to the vision and execution of the Director of Education Extension, Burton Duffie.

Always there for his teachers and principals, his office in the Builder’s Building at LaSalle and Wacker was the hub for the Evening Schools, Summer Schools, Adult Education and Americanization.  Duffie went around to all the buildings where his people were placed, and visited principals and classrooms in every month of the calendar.  He was respected by all who worked under his direction, and most returned year after year for this special segment of their professional life. 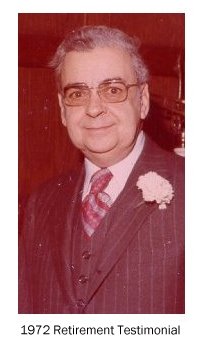 Born on October 23, 1907, his father, Lawrence Louis Duffie was an auto mechanic who worked for the Hartford firm which produced the Columbia automobiles.  Lawrence was part of the team which set the speed record in a gasoline car from Chicago to New York in 1903, and immediately went on to win a Gold Medal in the New York to Pittsburgh Endurance Contest.  The family moved to Chicago around 1908 and Burton remained in the city until 1950, when he married and moved to Evanston, where they lived until they retired in 1971 and went to live in Lake Bluff.  In 1977 he went to Delray Beach, Florida, and died there peacefully on May 27, 2006.

Burton Duffie taught industrial arts in the late ‘20s, and then mathematics at Tilden High School from 1930-45, and was Assistant Principal there from 1945-48.  He attended the University of Chicago, earning a B.S. in 1931 and an M.A. in 1934.  During World War II, he ran a school for the Army Air Forces, and in 1948 was made Director of Education Extension for the Chicago Public School System, which post he retained until he retired in 1971 with the rank of District Superintendent.

In 1950, Burton Duffie married Frances Rosenthal, who was also an educator and personal assistant to the then Superintendent of the Chicago Public Schools, Herold Hunt.  She was later an Administrator at Northeastern Illinois University, retiring with the rank of Professor Emeritus.  They had one son, Bruce, who taught public school music in Evanston for two years before going to WNIB, Classical 97 in Chicago from 1975-2001.  He now teaches Music History part time at his Alma Mater, Northwestern University.  Frances died in 1975, and the following year Burton married Dr. Marjorie Mills, who had been a school principal for many years.  She died in 1993, and there are no other survivors.

To see some photographs of Burton Duffie, click HERE.