What follows is an edited compilation of two articles which appeared in the WNIB Program Guide, written by Lita Grier.  The first was part of the series in which the entire staff was profiled one-by-one each month during 1994-95, and the second was a memorial tribute following his death in February, 1996. 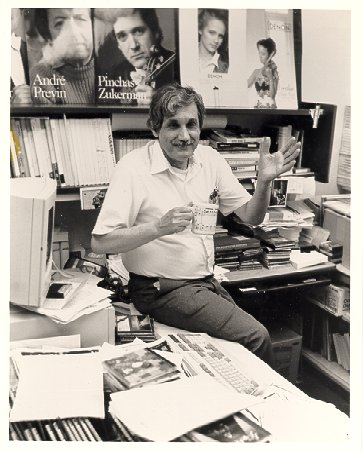 If you like the music on WNIB, the credit rests largely on the unassuming shoulders of Ron Ray, the affable chap whose job it is to choose a good deal of what is played on the station.

Unpretentious and low-key, Ron has a positively awesome knowledge of the repertoire and  discography.  Not just the top 50, mind you, but a world of lesser-known works that add so much luster to the rich musical tapestry of which the most popular masterworks are just the basic fabric.

Born and raised in Milwaukee, Ron became interested in music early by listening to the radio and  recordings.  At age thirteen he decided he would be an announcer and 12 years later he was.  After his discharge from the U.S. Navy, where he served on active duty on a destroyer, he landed his first job in 1957 at WFMR in Milwaukee as an announcer and programmer.  After eight years of honing his skills, he was ready to move on to Toronto, where he found a home for three years at CHUM-FM.  The Midwest won him back in 1968, and here he has remained here ever since.

Not entirely coincidentally, 1968 was the year that he came to work for WNIB. Concurrently  working as overnight announcer for WXFM, another Chicago station which broadcast some classical music in those days, Ron started with Classical 97 as a part-time announcer.  He would record a voice-track on tape, which had the introductions to the musical selections.  This was then played back on the air with the recordings inserted into the proper places.  He continued working at both stations until 1977, when he signed on full-time at WNIB adding the title of Program Director to his on-air chores. When he developed a rare condition called Spasmodic Dysphonia that affected his speech, it meant an end to his on-air career, so he devoted all of his time to the Program Guide.  Then, when he had all but given up hope for improvement, an experimental treatment was recommended to him, and he is now speaking proof of this miracle of modern medicine.  Although he is rarely heard over the airwaves, he very much enjoys talking to listeners, who frequently call for record information, or with other questions and  comments.  Their input is always useful and their requests for certain pieces of music often find their way into the schedule.

Divorced, his adult-son, Christopher, is an engineer.  Ron now lives with his significant other, Marilyn, in a Chicago apartment which is, as he says, is "crammed with LPs, CDs, audio and video cassettes, video discs, books, magazines and other periodicals.  There is also an occasional piece of furniture," he reports.  What does he do for fun when he leaves the station in the evening?  He haunts Chicago's great book and record shops, of course, always on the lookout for that fantastic or unusual release.  And like others at the station, Ron is a master of the New York Times Crossword Puzzles.  Do you sense a certain similarity of obsessions here at WNIB?

But let's get back to the video for a moment.  Did we say his command of music and discography was awesome?  At the end of a movie, he stays to the bitter end to read all of the credits . . . and he remembers them!  What he knows about film would fill volumes.  He also travels a bit - all over Eastern and Western Europe, twice to Russia and places off-the-beaten track, such as Brazil, Turkey, and, most recently, Egypt.

When Ron died very suddenly at age 62, his passing was mourned by everyone interested in classical radio in Chicago.  The staff and audience of WNIB, area musicians, and even voices from other stations were greatly saddened and went out of their way to praise his accomplishments and reminisce about his warmth and geniality.

The station received many letters, one of which, while distinctly personal, seemed to express  the  sentiments of those who had the privilege to meet him: "Allow me to express my deep sympathy and regret over the loss of Ron Ray.  His friendliness and hospitality will long be remembered.  Many years ago, when WNIB was located on Delaware Place, I noticed the WNIB call letters on the front of the building.  Out of curiosity, I climbed the stairs and who should greet me at the door but Ron Ray. He welcomed me like an old friend, and proceeded to give me a tour of the station.  I met him in similar fashion on several subsequent visits, and without exception, he was always friendly and gentlemanly.  He was a true credit to your station and will be missed by those acquainted with him." 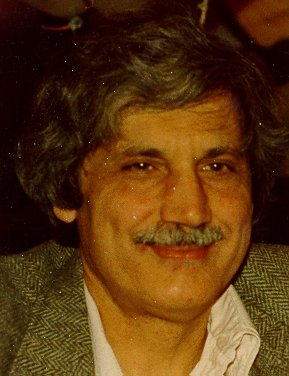 "Ron Ray was one of the most knowledgeable persons I've ever known" said Sonia Florian, WNIB's General  Manager,  "not  only  about music and recordings, but just about any and every subject I can think of. Along with that, the information he imparted was invariably delivered without any hint of pretension or pedantry."  Richard Covello, WNIB Continuity Director, added: "Chicago-area music lovers were the beneficiaries.  When listener's questions were referred to him, he was unfailingly cordial as well as informative.  Moreover, he was a terrifically witty person, whose company everyone enjoyed."

Announcer Miller Peters closely echoed these sentiments.  "In the nearly thirteen years that I knew Ron Ray, I never ceased to be amazed by his knowledge of music, not only classical, but also film and Broadway.  He never gave any indication whatsoever of flaunting his knowledge, but was always gracious in sharing it, not only with the WNIB staff, but also with all the people who called to ask him questions.  I will miss Ron as a source of information, but will miss him more because he was a friend."

Night-time announcer Bruce Duffie praised Ron as "a tremendous colleague - always programming a great variety of interesting music.  I learned a lot from him, and will miss him."  Morning host Carl Grapentine concurred: "Ron was a pleasure to work with.  He was always ready to track down a missing compact disc from our vast music library; to recall a record number from memory; or to offer assistance in any way.  We will miss him - we already do."

That goes for all of us.

Long before his death, Ron had let me program more and more of my shifts, until I was doing mostly my own material.  He often told me he was pleased  - not that his own load was reduced, but that his younger colleague was gaining experience and confidence.  Sonia knew of this, so when he died and Miller Peters took over as Program Director, I simply continued and added the few final hours to my monthly planning.  To his credit, Miller did his utmost to feature the same kind of varied and distinguished programming that had been the hallmark of WNIB as it rose to the top-ranking of Chicago classical music stations.  For several years, we were consistantly ahead of the other broadcast outlet, and while it was a team effort toward which everyone contributed, it was Ron Ray who led us and guided the mission.  Even on the final broadcast of February 11, 2001, I thought about Ron and all that he had done and what he had taught us.    -- B.D.