A conversation with Bruce Duffie 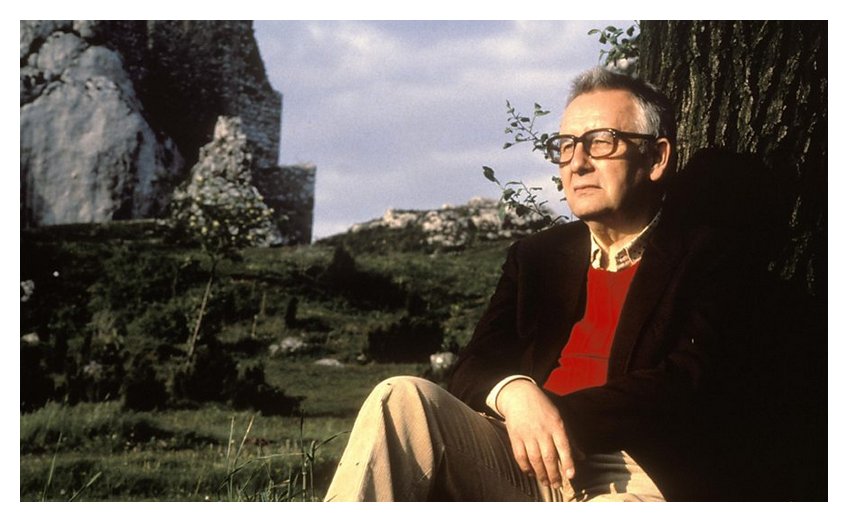 The Polish composer Henryk Górecki labored for many years with only local fame, producing many fine works for orchestra, chamber ensemble, and chorus.  The stunning (and unexpected) popularity of a certain recording of his Symphony #3 caught the attention of both the classical music public as well as a more general audience, and was one of the few CDs on the ‘charts' for many weeks.  Since then, he has toured the world, bringing his music to a range of audiences.  In April of 1994, Górecki was in Chicago for performances and recordings.  During his very busy schedule, I was able to speak with him for a few minutes.  The translation was provided by Lucina Migala, a broadcaster and choral director, as well as a leader in the Polish-American community of Chicago, who shepherded the composer around during his visit.

Bruce Duffie:  Thank you so much for taking time from your busy schedule.

Henryk Górecki:  It's a shame the day doesn't have more hours. 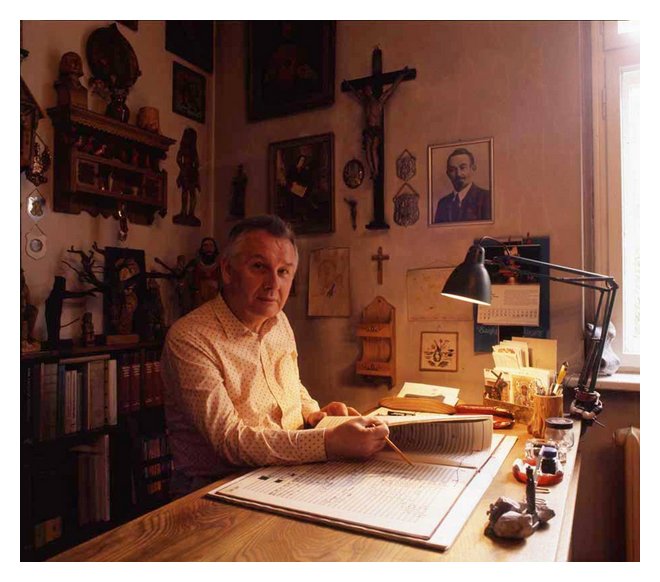 BD:  Do you always feel that you would want more hours to write?

HG:  When I write, I don't receive anyone. I don't take calls. I have only peace and quiet. I  have a one-track mind.

BD:  Do all your ideas come from you mind, or are there times when the pencil controls your hand across the page?

HG:  I don't think there's ever been a hand that writes or a pen that writes by itself. Even the great Bach or the great Mozart, although I'm not sure which one is the greatest, the hand doesn't do it itself. It does what the head tells it.

HG:  I've turned down a lot of commissions, and I continue to turn them down. I write only what I want. For example, there are some things you can't turn down, like the Kronos Quartet. They asked me to write a quartet so I'm writing a quartet. Of course, they didn't ask for a symphony. I've had many commissions for an opera, and also several for ballet. So far, I've never written a ballet nor an opera.

BD:  Is the music you write for everyone?

HG:  I do not choose my listeners. What I mean is, I never write for my listeners. I think about my audience, but I am not writing for them. I have something to tell them, but the audience must also put a certain effort into it. But I never wrote for an audience and never will write for because you have to give the listener something and he has to make an effort in order to understand certain things. The same thing is true of poetry, of paintings, of books. If I were thinking of my audience and one likes this, one likes that, one likes another thing, I would never know what to write. Let every listener choose that which interests him. I have nothing against one person liking Mozart or Shostakovich or Leonard Bernstein, but doesn't like Górecki. That's fine with me. I, too, like certain things.

BD:  Is it safe to assume, then, that in any audience, everyone will come away with something different from your music? 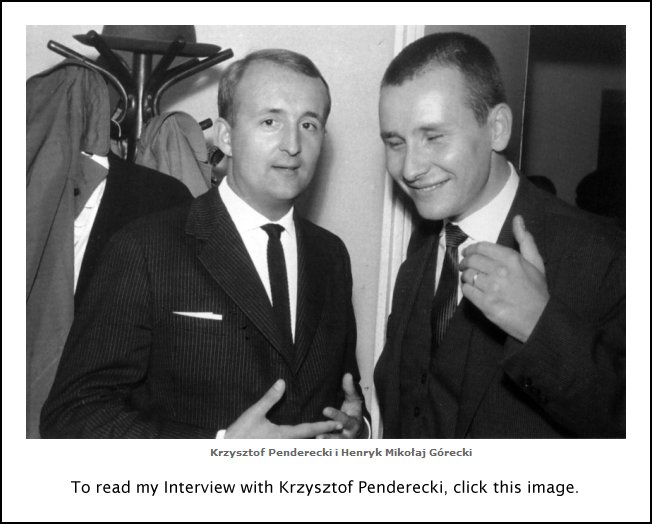 BD:  Is there only one way to play each piece? Or do you expect interpretation on the part of a performer?

HG:  Interpretations may be different, but there is only one thing on the page. I try to write as precisely as possible.

BD:  The big question:  What is the purpose of music?

HG:  I'll answer in a kind of humorous fashion. For quite a few years, I was a pedagogue, a teacher in the music academy, and my students would ask me many, many things, including how to write and what to write. I always answered this way:  If you can live without music for 2 or 3 days, then don't write. If you cannot live without music, then write. The same thing. If you can live without listening to music - any kind of music - then live without music.  In the intelligent world, you hear people say, "I know nothing about music." I always say, "It's nothing to be proud of, because just as you don't know music, so you also don't know literature and poetry and art." I don't believe it. I don't understand when someone says they don't know music. I can't understand that. It was as if I gave him a book and he didn't know what it was. It's like you couldn't breathe. Music is not to play. Music is for listening. If you don't need it, you don't need it. But then that is a very poor person. Very poor person. Very, very poor.

BD:  Does it please you that more and more people now, all of a sudden it seems, are listening to your music?

HG:  I'm not so sure they're listening to me. Leave the "me" out of it. There is something about people on earth that people listen to music. It's not important if it's Górecki's music. What is important is that the music is necessary, that they need the music. If it wasn't needed, they wouldn't spend money on it. After all, the equipment, the CD players cost money. The CDs also cost money. Maybe for 1 or 2 CDs, you'd have a hamburger. (All laugh) But if you are spending the money on something substantial, something that is not there, then it means that it's important to you. You need it.

BD:  Is it more important we're spending our time?

HG:  Music, unfortunately, requires time. Perhaps you not only have spent the money, but also wasted your time. This is not my fault. It might be better to spend time with a girl or with a beer.

BD:  I'm not interested in politics, either yours or your country's...

[Translator interjects]:    But he is very interested in politics!

BD:  Well, my question is, has the big change in politics in Poland over the last few years affected your view of music or your compositional process? 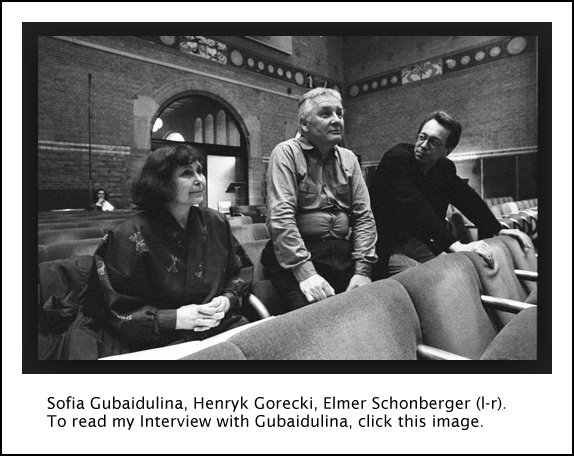 HG:  No. It didn't change me at all. I'm the same person I was before. All my life I've done what I've wanted and I've always fought for what I wanted to fight for, and I will continue to fight for those ideals. Some people take an automatic gun and shoot. I can only fight with my notes on the page. But the political changes are all still too fresh to be able to really evaluate, and I don't want to complain or criticize. It's easy to criticize and it's very easy to complain. But instead, you have to spit in your hands and get to work and not wait for someone to give us something.

BD:  Is music at all political, or does the music transcend the political process?

HG:  My dear, it would be a terrible poverty of life if music were political. I cannot imagine it because what does this mean – "political music"?  That is why I ignore questions about political music because music is music. Painting is painting. I can be involved in some political ideals. That would be my personal life. Is the 3rd Symphony of Beethoven political? He thought that maybe Napoleon would be the creator of a new world, but he didn't write about or for Napoleon. But that's already too far. I cannot imagine art, not only music, but art to be political. True art, be it poetry, music, painting, may have some color, some insolences, for example.

BD:  Is there a balance between art and entertainment?

HG:  I see only good music or bad music. There can be very, very good music that is entertainment.

BD:  Are you optimistic about the future of music?

HG:  If I didn't see a good future for art, I would have long ago stopped writing and probably would have shot myself in the head. I cannot imagine it for a person to live without art. But, for example, why the hell do people grow flowers? It's just not for business.

BD:  But if we don't grow flowers, flowers would still grow. If we don't write music, does music still grow?

HG:  The birds will sing for us. There would be music.

BD:  Thank you for all of the music you have given us.

HG:  I, too, thank you that I have such wonderful listeners. Thank you for a wonderful interview.

This conversation was recorded in Chicago on April 22, 1994.  Portions were broadcast on WNIB the following day, and again in 1998.  This transcription was made in 2010, and posted on this website at that time.  A portion was quoted in The New York Times obituary of the composer, November 12, 2010.  My thanks to Lucina Migala for providing the translation during the conversation.

Award - winning broadcaster Bruce Duffie was with WNIB, Classical 97 in Chicago from 1975 until its final moment as a classical station in February of 2001.  His interviews have also appeared in various magazines and journals since 1980, and he now continues his broadcast series on WNUR-FM, as well as on Contemporary Classical Internet Radio.